Growing up and loving life on the water! 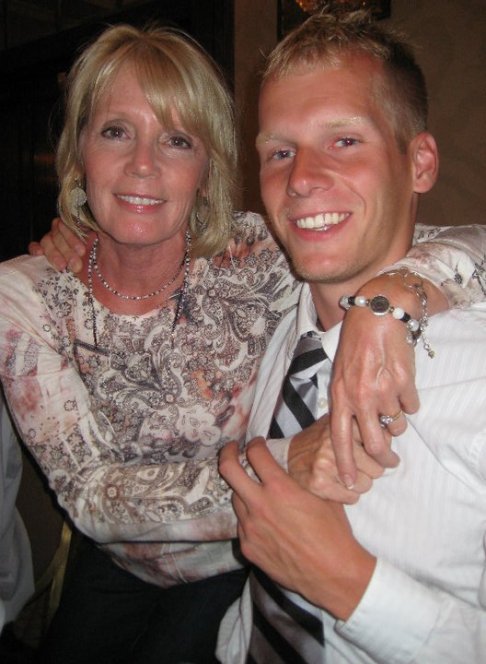 A genuine smile before the accident. At the banquet after winning nationals for waterskiing for Ohio State with my favorite person in the world, my Mom.

When I got home from the hospital I would avoid having people take pictures of me. I was pale and had not seen the sun for over six months. I had lost 45 pounds in the hospital, so I looked frail and weak, but most of all it was the wheelchair. When I was in the hospital I was surrounded by them but now I felt like the outcast.

I had people that would want to visit but I was nervous as to what they would think seeing me for the first time in a wheelchair. I was getting treated differently but mostly because I was acting differently. People could see through the forced smiles and the fake laughter. They were always trying to make me feel better and everyone promised me that I would walk again. 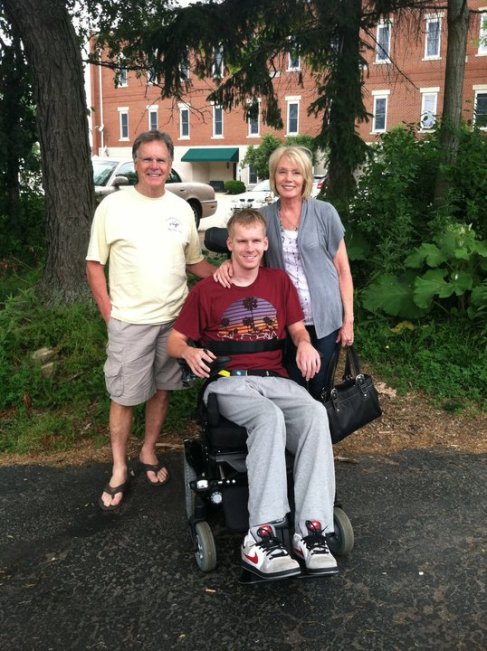 The first year… Still skinny from the hospital… A forced smile

I would sit through movies and halfway through it I would notice that I had no idea what was going on. My mind just had a constant question running through it, “is this going to be forever?” The more I asked myself that question the more I believed that was going to be the case. Every day I would fall into a deeper and deeper depression. After a while nobody knew what to say to me.

It was not until we went to Lake Erie for my mom’s 60th birthday where we lit off wish lanterns when that question inside my head changed. As the lanterns scattered throughout the night sky we were to make a wish. For every one that was sent into the night sky I wished that I would walk again.

The biggest forced smile ever. I sat all day watching my family play in Lake Erie unable to stand up and join them.

I asked my mom what she had wished for when we walked away from the beach thinking that she wished for the same thing. She told me, “I wished that you will be happy again.” That really caught me offguard and got me thinking. I could not wallow in self-pity for the rest of my life. I had to make a change.

I was not working towards anything at home and I knew that I had to create new goals. Failing miserably at my goal of walking again was driving me insane. I decided that I wanted to finish school at Ohio State, which seemed impossible. I created the goal of writing a book. I wanted to do therapy that worked towards walking and not just getting used to life in a wheelchair. That was when I found out about locomotor training at Ohio State and was soon evaluated and accepted. I found out about Creative Living which gave me the opportunity to live a more independent life. I was on my way back to Columbus, less than a year after my accident, to finish what I had started and start what I planned to finish.

A few weeks after moving back down here I wrote an entry titled ‘Finally a Smile On My Face’. No longer did I have to use that forced smile to take pictures. I was watching movies and actually paying attention and laughing. I went out of my way to get in contact with old friends that were still in Columbus. No longer did I fear what they would think of me when they saw me in a wheelchair for the first time. I no longer wanted people to feel bad for me. If they told me they were sorry I would tell them that they shouldn’t be and I would explain my goals and how that I’m just lucky to be alive.

The second year… Graduation day with Brooke… looking better. but still not there yet.

There is a huge difference in the pictures that were taken during that first year and those taken the second year and especially those taken recently. I look genuinely happy because I am genuinely happy. I am more optimistic about my future than I have ever been. All it took were goals and the motivation to achieve those goals. It also took the ability to let go of some of those goals. That one goal was walking, but who knows if there is a cure in the foreseeable future.

I love to look at my life through pictures. I love looking at my smile now knowing that it is not self-medication that brings it out of me. Each day brings a little more to smile about.

The way I pray every night is I go throughout the entire day and thank God for certain things that happened to me that day. If something went wrong, or if I did not accomplish something that day, I pray that I will learn a lesson from the situation or for strength to help me get that task done the next day.

Life is too short to be bitter all the time. You will not find happiness isolating yourself from others. It’s easy to live your life with a daily routine but I do not think that is satisfying. Change and seeking out new opportunities or searching for new passions is the only way that it will ever get better. Try to avoid patterns and routines. Push yourself to find something or someone that will put a genuine smile on your face.

6 thoughts on “The Evolution of a Smile”

View all posts by achelbling